John Betjeman is best known as the twentieth century’s most popular Poet Laureate. His verses were easy to understand and encouraged people to read poetry for the first time. Yet his work as a writer and commentator on English architecture both old and modern had, arguably, more impact on our perception of the built heritage than almost anyone else.

This illustrated lecture introduces us to the architectural writings and opinions of John Betjeman, discussing the history of the buildings he used as examples and exploring structures as diverse as churches, houses and pleasure piers. A man who made the unpopular fashionable and who was a pioneer in the subject of the sociological impact of buildings, John Betjeman was a popular but controversial figure. His work at the Architectural Review and his idea for a series of Architecturally-based guides should be as well known as his poetry, and it is a reflection on today’s society that they are so often eclipsed by his more popular verse.

John Vigar was personally encouraged early in his career by John Betjeman and is a Trustee of a national charity of which Betjeman was a founder. He is an architectural historian by profession, specialising in ecclesiastical architecture of which John Betjeman was such a protagonist. He also lectures for several universities and colleges and until his retirement worked for The Churches Conservation Trust.

He lectures extensively across Europe, and leads specialist tours in Britain, including one based on John Betjeman`s life and work, visiting his haunts in Oxfordshire and Berkshire.

John has been a professional speaker for over 40 years. He lectured for the University of Kent from 1992 to 2010, teaching a variety of architectural and social history studies, and has worked on a sessional basis for many other academic institutions. He has been a regular tutor at Denman (the national college of the Women’s Institute near Oxford) for over 35 years. An enthusiastic and popular approach to his subject ensures that he has a large following of regular students.

In addition to his contracted lectures John is a popular speaker at meetings of many different groups including The Arts Society ( formerly NADFAS), the National Trust, and historical societies country-wide. His lecture tours to public Libraries and Colleges in Germany where he speaks on English literature and its links with topographical history are also well received.

John Vigar`s specialist subject is ecclesiology – the study of church architecture and associated topics. He has written extensively on the subject and regularly leads tours to churches across England, both as part of his own programme of activities, and for other organisations. John has written the guidebooks for several hundred churches and is the author of books on the historic churches of both Kent and Sussex. He has visited and recorded over 13,000 of the 16,000 Anglican churches in England and Wales.

After retiring from university lecturing John worked for 13 years in the south-east region of The Churches Conservation Trust and he is a Trustee of the oldest church conservation body, The Friends of Friendless Churches. John is also a member of the Advisory Council of The Norfolk Churches Trust and has previously served as Hon Sec of the Ledgerstone Survey of England and Wales and as Photographic Curator of The Kempe Society.

All lectures now available by Zoom. 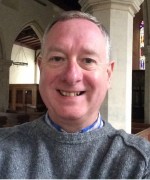 Other Talks on SpeakerNet by John Vigar