I'm travel writer and broadcast journalist, Simon Parker, and I've reported from over half the countries on the planet in the first ten years of my career. I've sailed and cycled 15,000 miles from China to London for the BBC, driven a rickshaw the length of India for The Independent and hiked every known route to Machu Picchu in the Peruvian Andes for The Telegraph.

I've spoken at hundreds of schools, universities and events all over the world, including TEDx, Cambridge University and the Frontline Club, London. My multimedia presentations combine anecdotes from some of the most isolated corners of the planet, with photos, audio clips and short videos.

I’m a British travel writer, broadcast journalist and public speaker working across a wide range of themes and subjects. If it involves travel, intriguing people and an untold story, then I’m interested.

I’ve reported on product shortages in Venezuela, the ‘migrant crisis’ in Greece, social inequality in the barrios of Northern Colombia and climate change in the high Andes and Svalbard.

I’ve paraglided solo through the Andes, hiked up Bali’s highest volcanoes and driven a rickshaw the length of India.

I’ve reported from over 100 countries in the past decade – from Bhutan and French Polynesia to Patagonia and Namibia.

Between March 20th and July 30th 2016 I embarked on my toughest story yet – to sail and cycle from China to London in 133 days. 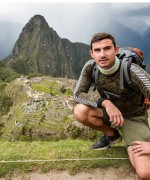 Other Talks on SpeakerNet by Simon Parker