Details of talks given by Iestyn Edwards

“The audience howled with laughter, stamped and cheered.”
The Times

I come from a family of variety performers and regularly appear in West End venues such as the Hippodrome, Café de Paris and Duckie; also the Royal Opera House, the Barbican, The National Theatre, Home House, Soho House and the Hurlingham Club. My Channel 4 shorts "Madame Galina's Rough Guide to Choreography" were twice broadcast worldwide. I’ve toured throughout Great Britain in the one-man shows Anything for a Tenor, Madame Galina Ballet Star Galactica/New Forces’ Sweetheart and the award-winning play Along Came Bill.

Following a private recital onboard H.M.S. Victory for Her Majesty, I auditioned (by mistake) to take my variety turn Madame Galina Ballet Star Galactica to entertain troops in Iraq and Afghanistan. My memoir about these accidental tours, "My Tutu Went AWOL", was published by Unbound Books in 2016 and appeared as a self-narrated Audible audiobook in 2018. It topped the Amazon Gay and Lesbian Biography Chart and reached number 2 in Comedy. I've toured the 'vaudeville preface' to the book since its launch at the Hippodrome to all the major literary festivals. 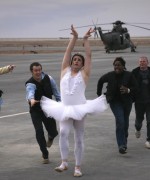 To contact Iestyn Edwards select a talk listed below.