My talks cover from when I started in showbiz with my first BBC TV appearance in 1957, my TV, radio and recording. My appearance on the Eurovision Song Contest in 1960, My touring with the top American and British pop stars of the 1960s, my cabaret perfoRmances around the world. My five years as in the lead role of the West End musical "ELVIS" and my 14 years as a Cruise Director working with American stars on American Luxury liners.

In the late 1950s & 60s I was considered to be a pioneer of British Popular music and appeared on television every Saturday evening as a regular on shows such as 6-5 Special, Oh Boy and Drumbeat alongside artistes such as Cliff Richard, Joe Brown, Marty Wilde, Billy Fury & Adam Faith. I was also part of the first and biggest tour featuring American icons Eddie Cochran and Gene Vincent. In 1960 I became the first pop star to appear in the Eurovision Song Contest. I then turned to theater and cabaret throughout the world and took the lead role of the Sir Lawrence Olivia award winning West End musical “ELVIS the Musical”. This was followed by my being a Cruise Director on Silver Seas Cruises and Ocean Cruise Lines for 14 years.

My talks are all very lighthearted and I'm proud to say well received with most organisations rebooking for parts 2 & 3.

I have three multimedia talks featuring photos. I can supply my own sound system, projector and screen if required. My talks are factual, fun and so I'm told, "fascinating".

The talks can be tailored from 45 minutes to 1 hour duration. They are as follows: 1 "You're Never Too Old To Rock 'n' Roll" 2. "Life After Eurovision" 3. "What Time is The Midnight Buffet?”

If required I have a number of CDs I've recorded over the years and a book I had published in 2007. I'm happy to bring these along as merchandise but only if requested. It's not a sales pitch! 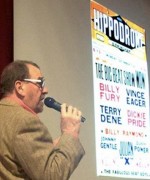