A Journey through the Rhymes and Ramblings of a Comedian Poet

An hour or more of Laughter in the form of observational comedy funny, laugh out loud poems and hilarious stories from my past.

These tales and comedy talks have been enjoyed by many, many groups of all ages (although 50 plus is my most appreciative audience).

I can provide my own small PA system and I do not require any special equipment to complete my talk.

About The Huyton Poet

I've been delivering humorous - laugh out loud talks to various groups for over five years now, as well as appearing at theatres and comedy clubs throughout the North of England (including a number of dates supporting Sir Ken Dodd on his touring theatre shows in 2017 - I also wrote material for Ken).

I provide and hour or more of fun and laughter with a mixture of observational comedy, funny poems and tales from my life.

I've been invited back to every event I've performed at. Testimony in itself 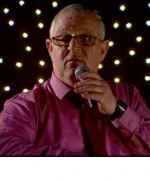