King Harold’s march from London is encapsulated in 1066 Harold’s Way, a 100mile long distance walk from Westminster Abbey to Battle Abbey inspired by King Harold II’ s epic journey to the Battle of Hastings. There can be no more emotive march.

The talk traces the route along the Roman road network still being used in 1066, from London to Rochester on Watling Street and then south through Maidstone, Staplehurst and Bodiam. It is a clear route through the daunting Forest of the Andreasweald past castles and battle sites with rivers, streams and valleys to cross, forests to forge and hills to climb and Roman roads, green lanes and ancient foot-paths to walk.

Three days of marching, the nights were drawing in, a camp at Rochester, maybe Bodiam too and a final night at Caldbec Hill.

There are few facts, just stories and legends and this engaging account of the King Harold’s march to Hastings will review why it all happened, the reasons for the Battle of Hastings, Harold’s Timeline to the Battle of Senlac Hill and, of course, walking 1066 Harold’s Way.

Whether it is a school talk, club meeting or group event, if you would like to find out a little more about the background to 1066, 1066 Harold's Way and other History Walks, David is an experienced and anecdotal speaker who will bring the history, walks and talks to life.

Talks will be tailored to meet your needs and fees, dates and presentation details will be discussed on enquiry.

David lives in St Leonards on Sea, East Sussex and walks, talks and writes about walking, local history and all things 1066.

He considers his membership of CAMRA, The Inn Sign Society, The Ramblers and the Long Distance Walkers Association to be a perfect match for walking and is the author and creator of 1066 Harold’s Way, a 100 mile long distance walk inspired by King Harold’s epic march to the Battle of Hastings, 1066. 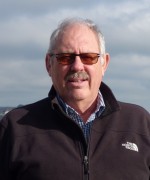 Other Talks on SpeakerNet by David Clarke