Stories from the "Clink"

Which country has a quarter of all the wold's prisoners?

Did George Best ever play for the HMP Ford football team?

All this and more from a former police officer who visited many UK prisons and met some "colourful" characters. Their stories might surprise you.

Approached with his customary humour, let Neil guide you in (and luckily out) of a few well known prisons 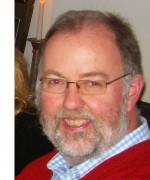 Other Talks on SpeakerNet by Neil Sadler