Old English To Modern English - The Saxons, Angles, Jutes and Frisians arrived on our shores from the fifth century AD. They brought with them the basis of our culture and a language which we refer to as Old English. Over the next 1,500 years influences principally from the Scandinavian and French tongues took this to Middle English and eventually to Modern English. English is the most diverse language and this is not simply down to the number of words adopted from quite unrelated tongues, a remnant of colonial days. There is a reason why English, more than any other, needs a thesaurus - indeed most languages never bother publishing a thesaurus (Japanese is a notable exception). That English has been influenced by so many others has led to such a great number of alternative words. Learn how these came began, where they came from and, most interestingly, how they evolved, how the meanings changed and developed to become the language we know today.

A freelance journalist and author, with 80 books, many articles, is a ghostwriter, innumerable crosswords and puzzles published, whilst also compiling and marketing quizzes. These books have mostly been on the subject of the origins of place-names and as part of the publicity Anthony has been interviewed several times on the radio and privileged to be the guest speaker at more than four hundred events. Fascinated by the development of language and etymology, based in Tamworth Staffordshire and chairman of both Tamworth Literary Festival and Tamworth History Group.

Happy to travel and available at short notice. 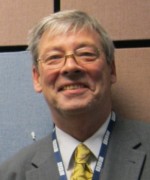