How to create and launch a product at lightning speed

The most successful businesses have two things in common.

They have great products and they can launch fast.

Creating and launching great products and services is an art and a science.

During this workshop, I am going to support you and your team to:

Map out a launch plan to generate revenues and pre-orders.

Simone is a multi-award winning serial entrepreneur and author who had helped people to launch more than 500 profitable businesses before he reached the age of 30.

He writes for Forbes, Entrepreneur Magazine, The Huffington Post and regularly features on tv and radio talking about entrepreneurship and the current small business landscape.

He works with startup entrepreneurs and experts who want to grow their existing business as well as multi-millionaires who want to launch new ventures, bringing ideas to fruition at lightning speed.

He speaks at more than 200 events every year, impacting thousands of entrepreneurs, startups, small businesses as well as large corporations.

In 2016 he was nominated in the House of Parliament as one of the most influential migrant entrepreneurs in the Uk by the Institute of Directors and won the award as Best Speaker in the Uk by the ACPTC.

In 2018 he featured in magazines alongside the royal family and won the Maximise Man Of The Year Award.

In 2019 he got invited to a private event with the royal family and the 53 presidents of the Commonwealth as an acknowledgement for all his work for entrepreneurs in the Uk. He also was a finalist as Young Entrepreneur Of The Year from the Federation of Small Businesses.

He also supports numerous charities in the entrepreneurial space as well as working with young people to help them launch successful social projects.

Simone is an incredibly entertaining, practical and unpredictable speaker, bringing music, magic and basketball together during his talks and seminars to teach while making sure everyone has a blast. 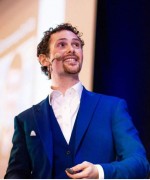