As musicians Adrian and Jane have worked in most concert halls, Cathedrals, Arenas, stately homes and recording studios in the country. They have travelled widely with orchestras and pop groups, and have encountered many famous people on the way. They have worked alongside people from Shirley Bassey, Rod Stewart, Yehudi Menuhin, Andre Bocelli, Jason Donovan, Neil Diamond, Lesley Garrett, Elaine Paige and Nigel Kennedy...to name but a few. They have appeared in feature films and television programmes such as Downton Abbey and Mission Impossible. Over the years they have accumulated a wealth of amusing, and sometimes surprising stories which they can tell from first hand experience. They bring their instruments with them and intersperse their anecdotes with relevant music.

I am a professional freelance viola player working in London orchestras, the West End, film and television recording, solo and chamber music. My wife Jane is in the same profession working as a violinist. We work together as players and we give talks together. As musicians we travel widely and work with many well known people. Interesting and amusing things happen in our lives regularly, and accounts of these happenings make very entertaining listening. We bring our instruments and include some music to accompany our stories. 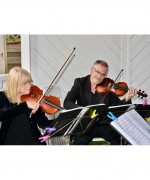