My Life in Crime

If you’d like to know what it’s like to share a bacon sandwich with a convicted murderer in the Old Bailey cells; what it’s like to wear a 200 year-old horsehair wig on a daily basis; how I came to sign an oath on the cabin hatch of the Golden Hind; what it was like to do battle with corrupt members of the Sweeney … then book me to talk on My Life in Crime, an hour of tales from the Bar, writing crime novels and family history.

Simon Michael is the author of the best-selling London 1960s noir gangster series featuring his antihero barrister, Charles Holborne. Simon writes from personal experience: a practising barrister for 37 years, he worked in the Old Bailey and other criminal courts defending and prosecuting a wide selection of murderers, armed robbers, con artists and other assorted villainy. The 1960s was the Wild West of British justice, a time when the Krays, Richardsons and other violent gangs fought for control of London’s organised crime, and the corrupt Metropolitan Police beat up suspects, twisted evidence and took a share of the criminal proceeds.

Simon was published here and in America in the 1980s and returned to writing when he retired from the law in 2016. The Charles Holborne series (currently five books) have garnered strong reviews for authenticity and excitement.

Simon’s tales from the Bar and the plots for his novels are based on his criminal cases, his life and that of his own family. Refugees from the Spanish Inquisition, the Michael family arrived in the Port of London in 1492 and remained in the East End of London for the next 500 years, rubbing shoulders with the Kray twins and others. Simon believes himself to be the only member of the Honourable Society of the Middle Temple formerly to have been a council labourer, a van driver and a gardener. 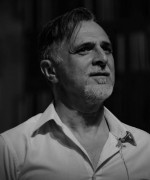