The Marathon des Sables takes place in one of the most inhospitable places on the planet and every April about 1200 hardy souls embark on a 250km (6 stage 6 marathon) footrace across the Moroccan Sahara. You have to carry all of your equipment and supplies to survive the 7 days of the event. The Discovery Channel calls it "the toughest footrace on Earth. In 2016 I embarked on this journey of a lifetime raising money for the charity Walking With The Wounded (whose Patron is Prince Harry) along with another 19 competitors running for WWTW. I returned vowing never to do it again but 24 hours later I signed up to do it again in 2018. The talk is about the MdS 2018 and Walking With The Wounded. Its packed with interesting stories of incredible people (some of the WWTW team were wounded veterans). Lots of visual aids, great videos and photos of this great adventure and is designed for people of all ages. Theres even a great, very emotional story about a 72 year old who set out to complete first MdS. This is a talk that will make you laugh, cry and hopefully inspire.

I was in the Army (Royal Signals) for many years I left in 1990 and started my own very small printing business working from home. Married to Shona for 34 years with 2 sons, one in the Army and another a Police Officer I was diagnosed with MS in 1997 and vowed that I wouldn't let the illness get the better of me.

Ive always been keen on keeping fit and heathy so run about 50 -60 miles a week I had always looked at the Marathon des Sables from afar wondering what it would be like to actually do it, little knowing that circumstances would mean I would take part in 2016 and a huge stroke of luck meant that I was able to complete it again in 2018 and correct the mistakes I made the first time I took part it.

I use my efforts in the MdS to raise money for Walking With the Wounded because I'm from a military family (parents and grandparents all served in the Army, as did I and my son continues to serve) WWTW are a fantastic organisation who prefer to raise money through individuals and teams taking on challenges and endeavours such as the Antarctic Challenge which Prince Harry took part in a few years ago, and last year a team walked around Britain to raise awareness about the mental health issues suffered by many service personnel returning from active duty. 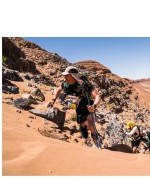