Based around the first twenty years of Tim’s career, and with quick and amusing references back to his school days he brings to life the world of sales and marketing with true stories of his own experiences which he relates to the audience through reference to the way they are sold to every day. Did you ever wonder about those sales campaigns, the successes and failures, the good and the bad, the add on insurance and the cold calls? He will reveal all and more including the dog that chased the cat throughout a whole appointment and why it did it, the death claim that wasn’t, the free gifts that were more popular than money invested, why he was called Justin for over 10 years, how he put Hull on the map and why ABCXYZ are the six most important letters in the speakers alphabet.

Tim is a regular speaker throughout the UK to clubs, societies, groups, businesses and organisations. He is now also becoming a regular speaker on the after dinner circuit. Tim uses his natural Northern sense of humour to bring his original stories to life and entertain audiences at a wide range of functions.

Tim is available to speak face to face to audiences when conditions allow and regularly delivers live talks on Zoom and MS Teams.

Tim qualified as a teacher in 1982 and after a year as president of the students union he ‘fell’ into the world of sales and marketing with Endsleigh Insurance. This was quickly followed by a move to Legal and General where he spent the next 16 years in sales and then management roles. In 1999 he moved to Frizzells where he progressed to a position on the board as Assistant National Sales Director. Made redundant at the end of 2002 he spent a year with the Skipton Group working on an acquisition and integration project before setting up his own company in 2004.

Tim lives in Skipton with his wife Julia and has three grown up children and four Grandchildren all of whom he is very proud. He has also never lost his love for Newcastle United!

Based on his wide and varied career and personal life Tim offers a range of talks which are all laced with good humour and include totally original material. 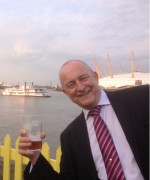 Other Talks on SpeakerNet by Tim Forman