My life as a micro-artist

Known as "The Hands of Genius" for his miniature masterpieces, Graham Short has spent over 50 years going to physical and mental extremes to produce the highest-quality engravings ever seen.

Appearing on television in 20 countries and the subject of a Discovery Channel documentary, Graham is now considered one of the most talented living artists in the world.

After several national newspapers highlighted Graham's genius, the demand for his work began to soar. His first fine-art show was an instant sell-out. This was followed by a one-man exhibition in the Clarendon Gallery in London's Mayfair, and later by a further exhibition in Scotland - which sold out in just two minutes!

His most astonishing nine-month project, 'Cutting Edge', shows the words "Nothing is Impossible" engraved along the sharp edge of a Wilkinson Sword razor blade. As a result of this effort, Graham attracted much attention from the world's media.

He works at midnight to avoid vibration from passing traffic. His right arm is strapped to the bench, allowing only his fingertips to move. He takes tablets throughout the night to lower his heart-rate to 30 beats per minute - then using a stethoscope he monitors his heart and begins to engrave with very fine needles - between heartbeats! Every few months he attends a clinic and undertakes a course of botox injections around his eyes to keep the muscles and nerves rigid. His extreme and obsessive way of working never ceases to amaze people!

Graham regularly gives talks, accompanied by the most fascinating slide show, across the UK. (Please bear in mind that if a speaker cancels at the last minute I would be pleased to step in . I would only need three hours notice!)

If this isn't the best talk you have ever heard, you will not be charged!

No other speaker will say this to you.

GRAHAM SHORT - The Hands of Genius

The most amazing and unusual presentation you are likely to see

I knew the day I left school at the age of 15 without any qualifications, that I had already failed on an epic scale. The only positive memory I took from school, was of an inspiring English teacher, who explained how anyone could succeed at the highest level imaginable.

Inspired by this same teacher, two of my class-mates went on to become world-renowned rock musicians, another became an Olympic runner and another pupil is now a television household name.

The teacher’s parting words, to me as I left school for the last time, were, “For the rest of your life, remember, if you want to achieve, you must think differently. Think the same as everyone else, and you will achieve just the same.”

This advice led me to securing the most enviable and prestigious client list imaginable, which included the Royal Family, The National Gallery, Rolls Royce, Chanel, Harrods, Fortnum & Mason, Richard Branson, Andrew Lloyd-Webber, Kim Kardashian, Elton John, Uri Geller and many, many other celebrities.

I am now considered by multi-millionaire fine-art investors around the globe to be the most talented artist alive today. Of course I don't believe it, but I'm sure you'll understand, it's good for my ego, as a thick Brummie to hear this!

After carving The Lord's Prayer on the head of a pin, and engraving the words, 'Nothing is Impossible' along the sharp edge of a Wilkinson Sword razor blade, I have appeared in news, radio and television features internationally, and been the subject of a Discovery Channel documentary .

My last exhibition in Kelso, Scotland sold out in just two minutes. Art that was smaller than a red human blood cell and totally invisible to the naked eye!

I go to greater lengths than anyone else in the world in an effort to produce art on such a minute scale. Working from midnight to 5.00 am, to avoid vibration from passing traffic, I lower my pulse to 20 beats a minute, and while wearing a stethoscope - and with the aid of potassium, magnesium and beta-blockers - I engrave between heartbeats when I am perfectly still. Regular injections of Botox in my eyelids prevents any distraction from eye-muscles and nerves.

I will ensure that your guests are thrilled with your event and are left talking about it long after it ends.

I have worked as the Royal Engraver for 40 years and I have recently appeared in every national newspaper in the UK, every BBC local news programme, News at 10, Sky News and TV coverage in 42 countries around the world, after engraving a portrait of Jane Austen on four new £5 notes, then spending them in shops around Great Britain.

"What a character and what an artist! We had an amazing evening. We were privileged to be so richly entertained by him." Chislehurst Art Society

" It was an astonishing presentation - one of the best we have ever heard. Very well done and thanks so much." G P Publications, Stourbridge

"A most interesting and amusing talk. It was clear everyone enjoyed the evening from their attention and laughter. A wonderful evening!" Kinver & Bobbington Supper Club

"Most enjoyable talk. Your honesty, frankness and funny stories added to the amazing presentation. We really had no idea what to expect. Unbelievable!" Rosamond Farley, Tewkesbury

"A lot of fun. Highly recommended." A. Deacon, Droitwich 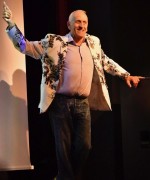