This extremely popular talk looks and the news, people, music and culture of this incredible decade and how it fundamentally changed British society in so many ways. Do you remember the long hot summer of 1976, The Queen's silver jubilee or the winter of discontent?

Can you remember dancing to the Hustle or remember how that wonderful film the Sting ended? Did you wear a tank top or Hotpants and danced to the sounds of Saturday Night Fever? Or maybe you remember the winter of discontent?

If so this is the talk for you, a presentation that brings back so many memories for those of us fortunate to have lived through it.

Paul Robbins BSc (Hons) BA, ISEB Cert, PHF is a highly experienced Presenter, Historian and Author. Paul was recently featured on National TV when he spoke about Sir Winston Churchill, the subject of one of his most popular presentations. Paul presents a series of Historical talks called "Step Back in Time" which have delighted clubs throughout the UK including U3A, Rotary, Probus, WI, Oddfellows, Masonic groups as well as Historical groups and societies.

If you are looking for a highly knowledgeable and entertaining speaker who enthralls audiences then why not contact Paul for further information - see below for contact details.

Paul's Great British Eccentrics talk brought this comment. "Your talk last week was VERY well received. One member said he had tears of laughter running down his cheeks by the end". It was also recently featured in the Frost magazine following on from a highly appreciated talk to a U3A club! You can see this review on the following link;

One of Paul's other talks , You Stupid Boy - The story of the Home Guard during World War 2 from his step back in time series was recently described by another group as "The best talk I've ever heard!"

Paul has over 40 years experience of public speaking! He is happy to offer a free no obligation demonstration of his talks and provide feedback from all of his range of Presentations from previous delighted audiences .

Paul is equally entertaining when doing virtual talks, so as long as your members have a PC they can still be entertained for an hour or so from the comfort of their own homes! All of the talks are fully illustrated which adds to enjoyment. Paul also offers Hybrid Zoom calls where he entertains groups at different locations. Zoom has the added bonus of significantly reduced costs for groups looking for an accomplished speaker.

What makes Paul’s talks so different, is that a lot of the content of the talks is not commonly known. Paul makes each talk enjoyable and informative. His "King Edward v111" presentation reveals secrets of the relationship between Edward and Wallis Simpson that regularly shocks audiences.

Most of the talks Paul delivers last around 40 - 50 minutes, with extra time set aside for questions at the end but they can longer or shorter to meet your own specific requirements. Paul stays as long as you need him to ensure 100% satisfaction for his audiences.

Here's just a few of the great comments Paul has received about his talks.

"You are a talented and brilliant presenter!

"What a great talk. So well presented and so interesting I did not know about some of the incidents you mentioned. Wonderful archive film too. Thank you so much will call on you again"

"Thanks, Paul, for a wonderful talk, as always".

" Paul Robbins did a great job this afternoon. We had about 38 attendees who all appreciated his professionalism and the high standard of his presentation. Brilliant and one of the best speakers we have had for some while."

" We all enjoyed your talk on Wednesday and look forward to the next one".

The following gives you further details on just some of Paul’s current talks that combine great subject matter, humour, with a natural love of History.

Great British Eccentrics The life of Sir Winston Churchill Jack the Ripper the Whitechapel Murderer "The East End of London and the Cockneys". Including a free lesson in how to speak Cockney Rhyming Slang! "You Stupid boy" The story of Britain's Home Guard. "You never had it so good" A look back at the news, lifestyle and culture of the 1950's. " The English Civil War" "Britain in the 1970's" "The life of King Edward the 8th" " A decade of Change" Life in 1960's Britain. And the recently added; "Her Majesty the Queen" a celebration of a unique Monarch 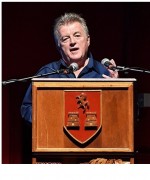