Paul is able to speak via Zoom on the work of Street Angels, Club Angels and Festival Angels including interactive questions and comments.

Paul has made a shorter version of his talk available on YouTube which is available free of charge - see paulblakeymbe.com/speaker to watch.

Paul Blakey MBE - is an international speaker who, over the last decade, has spoken to over 45,000 people at various events around the world including at the UK Houses of Parliament, Manchester Arena as well as on TV and radio.

As a keynote speaker Paul will use experiences as the founder of an international charity to motivate, challenge, entertain and inform.

Paul's most popular talk (ideal for after-dinner, ladies/mens groups, Rotary, church groups, luncheon clubs, WI, etc) is the setting up of Street Angels and its growth across the UK, Europe and into America as well as within club venues and at music festivals and sporting events. The talk includes stories, humour, audience interaction, the story of receiving the MBE including passing the medal round, opportunity for questions and fun! No group is too small or large! Paul is based in Halifax and so generally travel with 1.5 hours with the group meeting the travel costs (at 45p a mile) and a donation as well as an opportunity to have a book and information stall. To book Paul - email paul@blakey.org.uk or 07725501465.

Paul is able to speak (and lead) church gatherings, conferences or retreats. He is able to use practical experiences and Bible passages to inspire and motivate people towards community transformation and loving those in front of them. Paul is an ideal speaker at outreach events presenting the message of Jesus and the Christian faith. His style is down to earth, fun and inspirational. To book Paul email paul@blakey.org.uk or 07725501465.

The charge is a donation as well as travel at 45p a mile from Halifax. No equipment needed except a table to display books.

The talk is available on YouTube and can arrange a live Zoom / Messenger / Phone to answer questions following (or can do a live stream to your group).

Paul Blakey MBE is the founder of Street Angels, a project which, with the help of an amazing team of volunteers, has made a massive difference in over one hundred towns and cities across the UK and overseas. Founded in November 2005 the scheme has seen violent crime and sexual assaults reduce dramatically in many of the communities where the projects work. We have expanded our work to inside pubs and clubs, at music festivals, in communities and at train stations. Because of Paul's contribution to community safety he was awarded a MBE (Most Excellent Member of the British Empire) in the New Years Honours 2010 by Her Majesty the Queen. To oversee the growth Paul set up CNI (Christian Nightlife Initiatives) Network in July 2008 which has become a leading voice for faith based projects working within the night-time economy. In 2014 Paul became a published author with the book "Street Angels - the amazing story from binge to better" which collates inspiring stories from across CNI Network. Paul is an assessor for the Queens Award for Voluntary Services and has set up various other initiatives such as #FaithAndPoliceTogether and #Do1NiceThing. Paul will talk about work on the streets, in nightclubs and at festivals in a humorous and engaging way. 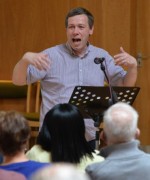 Other Talks on SpeakerNet by Paul Blakey MBE