A profile of of the great wealth and abject poverty that dominated the lives of thousands who lived in the 19th century, one in which London was one of the greatest and most influential cities in the world.

I am a professional speaker and tour guide specialising in the history of the City of London. and have a BA (Hons) degree in history Birkbeck, London), an MA in sport history and culture (De Montford University, Leicester) and a second MA in heritage studies (University of East London).

All my talks are supported by well-structured and visually interesting PowerPoint presentations. I bring my own projector, laptop computer and screen (if necessary). I speak for between 45-60 minutes but talks can be adapted to suit the time available.

I am a story-teller in the true sense following a career in journalism and as a documentary film producer. Talking about London, its people, poverty, wealth, events, tragedies, disasters, curiosities and controversies are well-receiv ed by audiences who often share their own lives and experiences with me in question and answer sessions.

A selection of London talks include:

POUNDS, SHILLINGS AND POVERTY (Life in 19th century London); THE CITY LIVERY COMPANIES (ancient Livery companies of a movement which still thrives) THE GREAT FIRE OF L0NDON (A disaster for the capital that prove to be a big opportunity) SLAVERY AND THE CITY (Looking back at the stain on Britain's history). MIND THE GAP (Tales of the Tube); THE GREENING OF LONDON (How the City became one of the world's greenest cities); THE FLOW OF HISTORY (Why the River Thames was so important to London); THE THAMES ESTUARY (the mysteries, tragedies and disasters of the lower reaches)) FLYING THE FLAG FOR WOMEN (The challenge for equality in the 19th century) GOODBYE TO THE HIGH STREET ? (From small-town drapers to big city department stores)

Since accepting an invitation to become an occasional Guest Lecturer for a cruise ship company, I have added some new subjects to my catalogue including VIKING MYTHS, NEWSREELS AND REAL NEWS (the rise and demise of cinema newsreels) and destination talks on GIBRALTAR, AMSTERDAM, LISBON, MADEIRA, MALTA and CAPE VERDE.

During the pandemic when visits were impossible, there was a good response to the Zoom talks I gave.. Now that face-to-face talks have resumed I look forward to getting out and about more often although and giving talks on Zoom when required.. 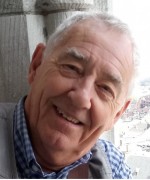 Other Talks on SpeakerNet by David Williams