Aurora - In Search of the Goddess of the Dawn

A voyage of discovery as we search for the elusive Northern Lights, what are they? why do they occur? and how can we best see them Andy is a veteran of over 8 years of Aurora travel, over 500 Aurora tours to his name in Iceland and this lecture utilises his expert knowledge and photography to bring the wonders of the Aurora to life. The lecture covers the history of Aurora and the people involved in explaining what the Aurora was. The science of the lights. why we get the colours and forms we see along with some tales of Aurora folklore and some pointers on how to get the best out of your trip to see them.

Please Note. I am currently unavailable for lectures until further notice:

Andy has been actively involved in astronomy and space for over 46 years becoming interested in astronomy & space aged 7. He has travelled the world to promote astronomy give presentations and lectures far and wide, visiting and taking to varied groups and visiting observatories as far afield as Hawaii, mainland USA, Australia and Chile. He has visited several space agencies and their facilities including those at NASA and ESA. He was involved in grass roots astronomy for many years and he has seen astronomy at all levels from the local astronomical society level to the public understanding of science and space to professional astronomy. Andy has a degree in Geo-Science / Planetary Geology and is a Fellow Royal Astronomical Society. He is also a freelance space journalist/photographer and has had articles published in the respected Spaceflight Magazine of the British Interplanetary Society and Quest Magazine in the USA. His images have been used online and, in many publications, and books. Other credits include lecturing for Cunard Line since 2007 as part of their "Cunard Insights" programme and he has lectured on all their Ocean Liners, QE2, Queen Mary 2, Queen Elizabeth and Queen Victoria. Andy has also presented talks for the London Science Museum and planetarium shows at the Royal Geographical Society. With his own planetarium StarDome. (www.stardome-planetarium.com) he has welcomed over 220,000 people to the wonders of space with the planetarium alone over the last few years. Every month for 5 years he was the regular astro guest on BBC Radio Cambridgeshire and he is often asked to comment on space news items for the BBC

Having the opportunity to visit many Space Centres and report from NASA’s Kennedy Space Centre for 2 Shuttle missions, STS-125 (For Spaceflight Magazine the Final Mission to Hubble) and the final Shuttle mission STS-135 the Final Shuttle mission (For the BBC), he also attended a military satellite launch at Patrick Air Force Base in Florida. Andy has met over 65 current and former astronauts and cosmonauts gaining a unique insight into their missions and lives, including most of the men who have walked on the moon including the late Neil Armstrong, and many others. One Apollo Moon walking astronaut, Charlie Duke of Apollo 16 is a personal friend. Andy has been honoured by having his picture flown in space to the International Space Station where it orbited the earth for 7 months. He has also been honoured by the International Astronomical Union for endorsing the Washington Charter and promoting astronomy and space to the wider public. He was also honoured by the European Space Agency by being awarded one of the Hubble Anniversary prints for promoting astronomy, one of only 100 awards in the whole of Europe. Andy has met many former and current NASA astronauts and many soviet/Russian cosmonauts including the first man to make a spacewalk, Alexie Leonov. Self Employed, Andy is the director and senior lecturer for StarDome - Astronomy & Astronautics, (a public outreach and professional consulting and lecturing service), his business also incorporates one of the UK’s largest and most popular mobile planetarium’s which has brought the universe to hundreds of thousands of people. He has given and still gives lectures to many audiences from Schools, Astronomical Societies and many other groups. He is also a keen photographer having had many of his images published both in print and online, one image of a partial eclipse was used extensively on TV and online by the BBC. In the last few years Andy has worked as a paid consultant and guide within the travel industry specialising in astronomy tours. He has developed and delivered a number of trips, including very successful series of trips to see the Aurora in Iceland as well as being an Aurora consultant for 3 Icelandic travel companies. He has accompanied Eclipse trips to China, South America, (Chile & Easter Island), the USA, Faroe Islands and Australia. He is well travelled and enjoys passing on his knowledge and enthusiasm for introducing people to the wonders of the night sky. Andy loves to travel and meet people, sharing his knowledge and passion for Space and Astronomy. 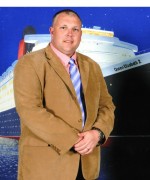 Other Talks on SpeakerNet by Andrew Green BSc (Hons) FRAS