Can you hear me Mother? - The Art of the Monologue

From Shakespeare’s Hamlet to Stanley Holloway the monologue has formed part of the dramatic landscape. In this talk we will see how the monologue has developed. We will look at it’s role in 19th Century Politics and see how “stump speeches” evolved into the modern “soundbite” Of course this will feature performance of a number of monologues and a visit to “A famous seaside place called Blackpool”

As this talk relies on audience feedback experience has shown it is not suitable for delivery via Zoom.

David is an engaging and animated professional speaker on a variety of historical subjects. During his 35 years in the Civil Service he ran training programmes on public speaking and spoke to audiences from 5 to 500 people. Since retiring five years ago he has travelled extensively across the UK giving fully illustrated talks to a variety of groups such as, Probus, WI, National Trust and U3A.

Married to Lynn he lives in Belper Derbyshire, where he was also a guide at the famous Belper North Mill for three years. They have travelled extensively across the United States visiting battlefields from the American Civil War as well as the Alamo. He has studied American Civil War in detail for many years. David and Lynn were members of the Towton Battlefield Society when they lived in Yorkshire, hence an interest in the Wars of the Roses. David was also a battlefield guide for the Society for 7 years.

More recently David has expanded his repertoire of talks to include such diverse subjects as; The Bentley Motor Racing Team of the 1920's , his adopted home town of Belper and its key role in the Industrial Revolution and monologues from stump speeches to political tweets, via, of course, A Famous Seaside Place called Blackpool.

Please Note If your organisation would like a longer, more in depth, workshop or event on one of his topics please get in touch to discuss content and price.

What audiences have said about his talks:

“With our knowledge of this bit of history (The Alamo) mostly confined to a John Wayne/Davy Crockett film and song, it was a most entertaining and enlightening morning.”

"This is just to say thank you for giving us such a fantastic talk last night. I have been inundated with emails asking if we can please have you come to speak to us again sometime."

“You can almost smell the gunpowder”.

“I wish you had been my history teacher – I would have listened!” 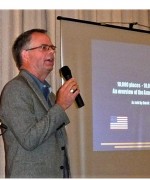 Other Talks on SpeakerNet by David Skillen